6 interview tips to land your best sales role yet

Today’s business world can be really confusing when managing your career. How to meet potential employers? How to dress for an interview? How to negotiate your offer or a raise? All of these topics and more are discussed in our Recruiter Roundtable series, where we invite a diverse group of Sales Talent Agents to share their ideas and debate the topics important to you. In today’s roundtable we discuss best and worst questions to ask in a job interview. 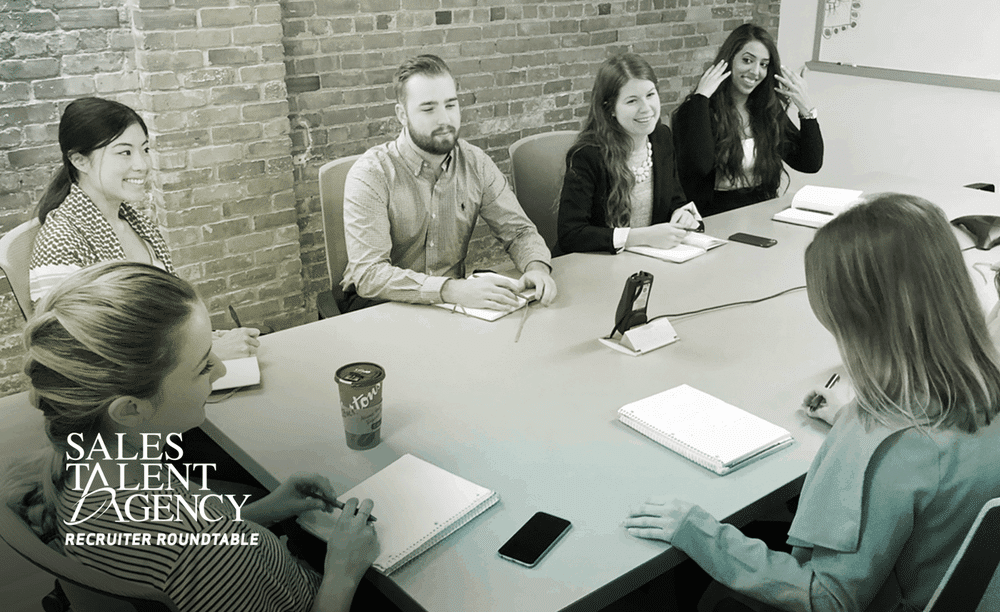 Alter your questions based on the interview stage

Jamie: One of the things we always tell candidates is to ‘ask good questions’… but what does that actually mean?

Jeevan: If it’s a first interview you definitely want to avoid asking the obvious ones surrounding vacation and time off. You never want to be perceived as ‘lazy’, especially not in a first interview.

Katrina:  Exactly. You should not ask if you can take three weeks vacation within the first six months and on top of that, if you’re allowed to take additional days off. You want to give the impression that you’re going to work hard and do whatever it takes to be successful in the role. Typically discussions around base pay, commissions, company hours and perks should be reserved for later on.

Kim: I think a good question is any question that centers around getting a better understanding of the company and the role. For instance, what does it take to be successful? What are some challenges most people face in the first three months and how can I proactively work to overcome them?

Sheldon: Another good one is to ask what kind of culture they are aiming to create and how you can be of positive contribution to that.

Hayley: Yes, I love that question. I would also say, if there’s multiple people in the room with different agendas- HR, sales, marketing- remember what their agenda is and ask them questions that make them feel included and show that you’re interested in them.

Beth: Say I’m speaking to the founder of the company, I would ask what their values are from a really high level, just because I know as a candidate, it’s just equally as important to know the company that you’re going to work for and if those values are aligned with yours, because ultimately it needs to be a partnership.

Jeevan: One more tip I want to throw in is asking questions based on the specific company. Most people know about bigger companies like Google and their robust company culture… It’s also easier to find out about them via Glassdoor. But when it comes to smaller companies it’s a lot harder to know what they are all about as many of them don’t have reviews or anything that you can go off of.

Jamie: Glassdoor, that’s a great area to discuss. You are researching a company and they have six-hundred great reviews and a handful of negative reviews. Do you bring that up in the interview or not?

Katrina: I’d bring it up with a smaller company that has bad reviews and ask if they’re changing or what they’re doing to address those concerns. I have a current situation with a client who has had some really bad reviews, but they’ve made some changes to actually fix that, so, I’d address it. You could always position it by saying: do you feel this is a fair reflection of your organization?

Beth: I always tell people to take reviews with a grain of salt. That said, I think it shows that you’ve done your research and given the company an opportunity to speak to what they are doing to fix the mentioned problem areas. Otherwise, if there are a handful of negative reviews that are in fact accurate and you see them yourself three months into the role… that’s the last thing that you want.

Show choice without being entitled

Jamie: As a candidate you want to show that you have choice, but at the same token you don’t want to come across as deserving of the role in an interview.

Alex: You want to show that you’re qualifying the company and role for yourself by asking questions such as ‘what do you look for when you’re hiring an individual?’, as it shows an educated decision if given the choice.

Jamie: It’s always a balance in early interview stages between buying and selling, but I think you are selling more than you’re buying. Your questions should be related to positioning yourself as someone who’s going to bring undeniable energy and enthusiasm. As you move along in the interview process you need to take on more of a buying aspect as you ultimately want to make a good career decision.

Kim: I second that point. In the final interview stages you are definitely ‘buying’ as they’ve obviously brought you in again with intention to hire you. I mean it depends on the company, some are more upfront than others if you’re in a final stage, but try to be aware. At the end of the day it should be a partnership and you want to make sure your values align.

Sheldon: In the buying stage, I would personally avoid the awkward work-life balance question. I would go with cultural questions about team events, team building or even the opportunity for continual learning and progression. I feel that last one shows a little bit more of what they’ll do for you as well.

Contextualize the questions you ask

Justina: Sometimes I find buying questions can be uncomfortable, so if you can contextualize them it really helps. For instance, instead of outright asking about the team environment, which can maybe put the employer on the spot, you could instead frame it about how you want to know more about the current staff to make sure that you’re going to add value to the existing team and be able to build relationships.

Katrina: Yeah, if you’re going to ask about work hours, you could say something like ‘I’m used to working six to ten at night, so I’m not worried, I’m just interested to see what your hours in this office look like. When is it exciting, when is it dead?’.

Be authentic to avoid sounding scripted

Jamie: Often times we’re so focused on salespeople dealing with sales leaders. So we are accustomed to asking questions like “do you have any objections about hiring me?” but sometimes this can come off as so sales-y and scripted. If you can add a little humor, do it. Say ‘I’d be a horrible candidate if I didn’t ask one of the main questions that I’ve been taught to ask which is: is there anything that I should’ve done differently, anything that makes you hesitant?’

Hayley: Or even re-word it a bit and ask if you can clarify anything or if they have any additional questions, not so much direct, but still kind of getting to the same point.

Jeevan: Depending on the client you could just go for it and ask a question that’s even bigger- ‘Is there anything another candidate in your pipeline has that you think gives them a distinctive advantage over me?’ I mean, it’s definitely a bold move… Maybe there’s another way of asking less directly. I really depends if you can get away with it, right?

Beth: My biggest piece of advice would be to make sure that the questions are authentic and that you genuinely want the answers to them. As a person who interviews for a living, you can sense immediately when someone is just asking a question to tick a box in their mind.

Jamie: Thanks Beth. Overall I think we had some solid pointers when it comes to the do’s and don’ts of interviewing for your next (and best) sales role. Thanks everyone and this concludes another Recruiter Roundtable discussion!